A visit to the gun range closest to northwest Regina yielded an important takeaway: You can use your FMJ rounds at Condie, unlike in some previous years.

Regina Fish & Game League (aka Condie Gun Range, they go back to 1954 and have more recently run events like Project Mapleseed 2022 and First Shot clinics) range regulations do not prohibit the use of Full Metal Jacket ammunition any longer.

There are already bins for brass and steel cases located around the range at Condie to help make “brass sorting” easier, but in this instance we’re describing only the bullets rather than other components in the cartridge (primer, case, powder).

After speaking with some of the Range Officers on hand, they confirmed that FMJ ammunition is now welcome at the club. This is great news for students who have been looking for affordable ways to shoot, and offers our students a quick chance to learn about what Full Metal Jacket bullets are, and how/why they are different from more frangible hunting ammunition.

A shooter fires his rifle downrange, ahead of the 2022 hunting season at the RFGL Condie Rifle Range near Regina SK [Sept 25, 2022]

“A full metal jacket (FMJ) bullet is a small-arms projectile consisting of a soft core (often lead) encased in an outer shell (“jacket”) of harder metal, such as gilding metal, cupronickel, or, less commonly, a steel alloy. A bullet jacket usually allows higher muzzle velocities than bare lead without depositing significant amounts of metal in the bore.

The bullet was invented in 1882 by Swiss Colonel Eduard Rubin while he was working for the Swiss Federal Ammunition Factory and Research Center.

The use of full metal jacketing in military ammunition came about in part because of the need for improved feeding characteristics in small arms that used internal mechanical manipulation of the cartridge in order to chamber rounds as opposed to externally hand-reloading single-shot firearms. The harder metal used in bullet jackets was less prone to deformation than softer exposed lead, which improved feeding. That also allowed bullets to withstand much higher velocities caused by the decrease of the caliber.

It is sometimes thought that military use of FMJ ammunition was the result of The Hague Convention of 1899, Declaration III, prohibiting the use in international warfare of bullets that easily expand or flatten in the body. However, jacketed bullets were adopted by most European militaries during the late 1880s and early 1890s, about a decade prior to the Hague Convention.

By design, fully jacketed projectiles have less capacity to expand after contact with the target than a hollow-point projectile. While this can be an advantage when engaging targets behind cover, it can also be a disadvantage as an FMJ bullet may pierce completely through a target, leading to less severe wounding, and possibly failing to disable the target. Furthermore, a projectile that goes completely through a target can cause unintentional collateral damage behind the target.”

FMJ bullets represent a major cost savings to shooters, but for many years gun ranges have banned them. Sometimes cited as a source of range fires, they would be far from the only rounds to do so. FMJ rounds have been blamed for range damage when used in inappropriate circumstances; the copper-washed lead cores tend to throw sparks.

When shooting FMJ rounds at hard targets (think steel targets or a rocky area) it is quite possible for rounds to ricochet dangerously in unfortunate and unlucky circumstances, so extra care should be used when selecting appropriate targets.

News of locations where shooters can expend commonly-available ammo (like FMJ-type bullets) comes welcome to Saskatchewan shooters, who have been left with little in the way of choice rounds due to ammunition shortages and cost increases due to inflation. Hunting cartridges often cost dollars per round, and calibers like .300 Winchester Magnum, .243 Winchester, .30-06 have been hard to obtain recently in North America.

Blood Testing for Lead in Saskatchewan

Today we are taking the opportunity to answer questions about how blood testing is conducted in Saskatchewan for elevated levels of lead. With repeated exposure to ammunition and gunfire, target shooters and hunters might accumulate this toxic metal in their bloodstreams (especially if they fire indoors in a poorly-ventilated area). Lead poisoning has a devastating list of effects listed on Wikipedia: “Exposure to lead can occur by contaminated air, water, dust, food, or consumer products… Lead poisoning is preventable.”

Lead dust exposure happens when a firearm sprays the muzzle (and ejection ports) with lead dust – this happens upon firing. The concern is that if shooters and observers aren’t well-protected that very real health concerns can manifest.

RGSL staff have, in the past, asked Health Canada, who advised that there was no uniform standard for lead exposure at Canada for gun ranges. They do, however, have this guide to reducing a person’s exposure to lead, under their health > healthy living > health and the environment > home and garden safety section. It’s pretty general in nature.

RGSL instructors also asked the Ministry of Environment for Saskatchewan, who did not offer comment on any manner of standards for indoor gun ranges in the province. Ministry officials directed our inquiry to the Saskatchewan Health Authority, who responded pre-pandemic:

“Thanks for your inquiry. Individuals can have blood lead testing done by the Saskatchewan Health Authority at the Roy Romanow Provincial Laboratory in Regina. The orders would need to come through a SK licensed physician. So, the process would be to see your physician and ask to have this testing performed.

Generally, air borne lead is only an issue if a lot of time is spent in indoor gun ranges. Monitoring individuals who spend a lot of time in these types of facilities is definitely warranted. Please contact if you require anything further.” [J.E., Clinical Biochemist, Roy Romanow Provincial Laboratory, Saskatchewan Health Authority, May 8, 2019] 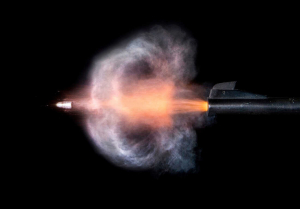 Various articles on the subject have captured the public interest. While gun range associations and health authorities don’t appear to be checking for lead proactively in Canada in 2022, there’s plenty of media covering and documenting the various poisonous effects at ranges across the United States – where gun culture is more thoroughly entrenched, and there are multitudes of indoor gun ranges.

The Seattle Times has been covering this story for a long time, and even found that American range workers and police officers have been getting sick from gun ranges’ excessive levels of lead dust.

So the bottom line is to stay careful, and to exert your own personal responsibility to avoi