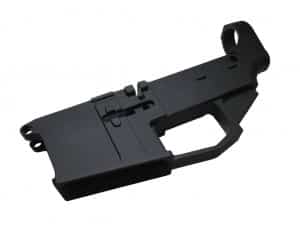 Receiver blanks are firearms as defined in Section 2 of the Criminal Code for the following reasons:

When a receiver blank is inspected by the Canadian Firearms Program and determined to be a firearm, it will be published in the Firearms Reference Table (FRT).

Future import and retail sales of receiver blanks will be available only to individuals or businesses that have the appropriate firearms licence. Restricted and prohibited receiver blanks must be registered.

Until today, some of these had been legal for sale in Canada. Looking at the list of affected firearms, the obvious standout is under “Make and model designation: AR-15 (M16) rifle. Classification of the unmodified receiver blank: Prohibited. Remarks: The receiver blank can be made into either an AR-15 rifle or an M16 assault rifle”. Most of the other lower receivers exist, but are presumed to be produced in much smaller quantities.

This means that existing merchants and owners of these receivers are now in possession of what the RCMP are interpreting as Prohibited weapons or devices, and so people who own these could stand to lose out financially, as well as the more-important potential for criminal ramifications. Reddit’s /CanadaGuns and /Canada both have numerous articles at the top of their respective subreddits today where posters are actively discussing the topic.

At this point in time RGSL does not have any other information other that what is contained on the website for the Canadian Firearms Program, and so we implore anyone with questions to call the RCMP at 1-800-731-4000 with their questions or comments.