Gun control advocates such as the Coalition for Gun Control have argued that Trudeau “lacks courage”. Meanwhile, the pre-eminent pro-gun group Canadian Coalition for Firearms Rights has organized members and upped member counts and calls-to-action. The CCFR has recently blamed the CBC for what it perceives as “media bias” regarding gun-story coverage.

This morning in Toronto, Liberal leader Justin Trudeau made an annoucement in Toronto – reportedly at the Greektown district for the announcement, significant as the site of the Danforth shooting last summer. That mass-shooting took three lives total, and injured 13 other people. The announcement today was seen as a follow-up to Bill C-71, the government’s last firearms bill, which received Royal Assent and became law at the end of the last session of parliament in Spring 2019.

Prior to this announcement, the government has long dropped hints with increasing overtness that more gun restrictions are on the way if the ruling Liberals retain a majority government. This move is expected to set the leaders of Canada’s major political parties apart from each other in a major way, as platforms are being unveiled and scrutinized ahead of the October federal election. Conservative Opposition Leader Andrew Scheer from Regina – Qu’Appelle, vying for the Prime Ministership, said even before the election that he would undo any gun changes brought forward by the Liberal government (including the now-passed Bill C-71).

The 338 poll analysis and electoral projection aggregator has daily reports on the upcoming data regarding the election. They’ve been historically accurate among pollsters. Recently, they correctly prognosticated a narrow win of Doug Ford’s PC party in the Ontario provincial election and have drawn comparisons for methodology and accuracy to American polling aggregator FiveThirtyEight, who famously gave U.S. President Donald Trump the largest chance to win just before Election 2016. 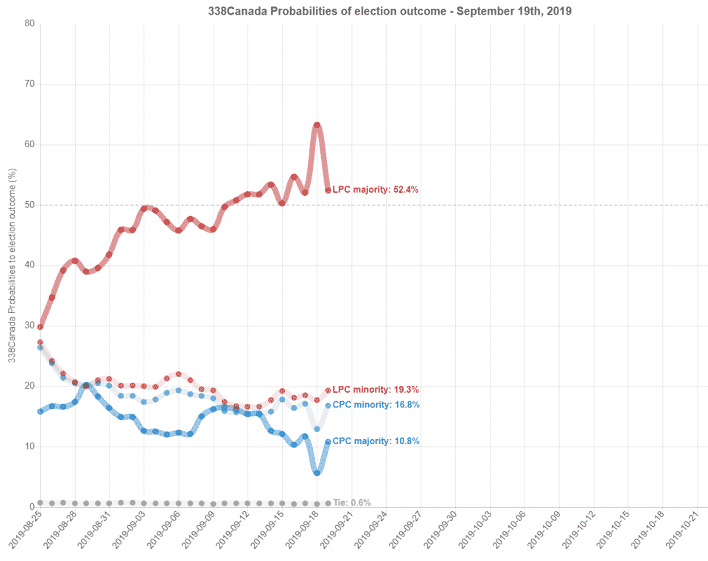 Despite these successes, presently, The 338 is showing that while the popular vote is a toss-up, the seat-count is currently projected to either be a Liberal majority or minority government. The only other statistically probable outcomes at present include Conservative majority or minority governments and no one party has a clear path to victory yet; the approximately 2.2-million Canadian adults with gun licenses will need to wait to see what happens next.

It remains to be seen if today’s proposals to tighten firearm legislation in Canada will have an impact on the electorate, or polling data in general as we get into the swing of campaign stops, speeches, and rallies.

Recently, our Commonwealth ally New Zealand moved into the second phase of their post-Christchurch mass-shooting gun ban; all semi-automatic firearms are to be turned over as part of a buyback. Further legislation announced only one week ago means that there will be a nation-wide gun registry to monitor and track all firearms in the country. Non-compliance is punishable by prison time there. With Canada appearing to follow suit, things will be interesting to say the least.

Strap in and grab your popcorn to watch another interesting season of Canadian politics! We’ll keep you up to date with any policy changes, likely once we’re all back closer to governance, policy and bills than we are to speeches, promises, and the campaign trail.

September 19 seat count and popular-vote-count projections are from The 338 polling aggregator.

*EDITOR’S NOTE: You need to show a gun license to buy a gun in Canada, and have for decades. The point the PM is making here relates to verifying said license is actually valid during transactions.

RGSL has now increased its inventory of firearms to include a brand new, never-fired Chiappa 1873 22LR Single Action Army revolver. It replaces an old worn-out revolver of similar design that was used for years by students training in the classroom.

This handgun’s old-school revolving action dates to the nineteenth century and as such has archaic styling, features, and lack of manual/built-in safeties.

These revolvers can fequently be seen in Old-West Turner Classic Movies as a mainstay firearm of the era.

This handgun has been disabled, and will be used to teach students safe handling, use, transport, display and storage procedures starting as soon as the registration certificate arrives from the RCMP. With any historical firearms, users are cautioned to use particular care as the last century has seen substantial improvements in firearms design with regard to safety and reliability.